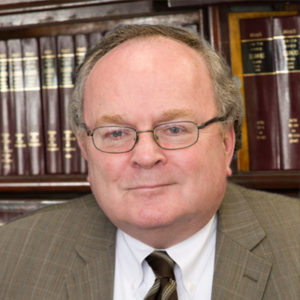 Tom Brejcha has been litigating cases in federal and state courts over the last four and a half decades. For the last 17 years, he has served as president and chief counsel of the Thomas More Society, defending the sanctity of life, religious liberty, and family values.

Tom grew up on Chicago’s South Side, attending Catholic schools and graduating with honors from Notre Dame. He won a competitive Root-Tilden Scholarship to New York University Law School where he was Note & Comment Editor of the NYU Law Review and was elected as Class Representative for other members of the Class of 1968.

Serving as an Army Captain in Vietnam during 1969-70, Tom was awarded a Bronze Star and an Army Commendation Medal. Then he enrolled on the GI Bill to pursue further studies at the Sorbonne and Alliance Francaise in Paris. Coming home, he became a successful business litigator in two private law firms, handling antitrust, securities, labor, and other cases, two of which reached the U.S. Supreme Court.

In 1986, Tom volunteered to assist the principal named defendants in the infamous NOW vs. Scheidler case. The NOW case was so vast and complex that it crowded Tom out of his business law practice. When his law partners told him to “quit the case or quit the firm,” he resigned his law partnership and co-founded the Thomas More Society with Joe and Ann Scheidler in March, 1997. NOW vs. Scheidler went before the U.S. Supreme Court three times. The pro-life defendants prevailed on the merits by decisive margins of 8-1 in 2003 and then again by 8-0 in 2006 (Justice O’Connor retired before the decision was handed down or else it would have been 9-0). The case finally drew to a close (28 years after its filing!) when the U.S. Court of Appeals in Chicago finally rejected the abortion forces’ last appeal from the lower court’s award of some $65,000 as reimbursement for the pro-lifers’ out-of-pocket costs (filing fees, witness fees, etc. – a fraction of their actual total costs). The opposition’s objections were rebuffed as groundless and even “preposterous.” Mirabile dictu! Four weeks later, NOW actually paid in full!

Tom has testified before U.S. Congressional Committees (Judiciary, Ways & Means), as well as before state and city legislative and regulatory committees. He has appeared on many national and local broadcast shows and other media, such as Fox News’ Bill O’Reilly and Sean Hannity shows, MSNBC, CNN, Relevant Radio, EWTN, CBN, the 700 Club, and Chicago Tonight. Many groups have given him awards for his legal work as well as for his pro-life and religious commitments, including Catholic Charities, Pro-Life Action League, National Lawyers Association, Cardinal Mindszenty Foundation, Illinois Citizens for Life, Illinois Students for Life, Chicago Catholic Citizens, and others.